One of the little known ‘superfoods’ for newborn babies is colostrum. It is a nutrient-rich fluid produced by women, expressed during the first feeding. It builds the baby’s immune system, and is packed with all the proteins, salts, fats, and vitamins and most importantly lactose which are all vital to a newborn’s growth. Given that newborns have very small digestive systems, colostrum delivers all the nutrients in a very concentrated low-volume form. It is imperative that healthcare workers are properly trained to support mothers to initiate early breastfeeding and continue exclusive breastfeeding up to six months. Photo: GMB Akash / icddr,b

The World Health Organization (WHO) and UNICEF recommend early and uninterrupted breastfeeding –initiating breastfeeding within one hour of birth. WHO encourages skin-to-skin contact between mothers and infants as well as assistance to mothers by healthcare providers. Statistically, breastfed children have at least six times greater chance of surviving in the early months than non-breastfed babies.

Researchers at icddr,b explored the factors which influence breastfeeding within one hour of delivery, conducting one of the few direct observation studies. Examining the 249 normal vaginal live birth deliveries, the researchers calculated a median time of 38 minutes from birth to breastfeeding initiation. A substantial majority of women (68.7 per cent) initiated breastfeeding within the first hour.

The majority of the women (92 per cent) were housewives and just under a third (30 per cent) had completed secondary education. Most – 60 per cent – were aged between 15-24 years and for half of them, this was their first pregnancy. Most importantly, approximately three-fourths of the mothers delivered full term babies (over 37 weeks).

The study detected a noticeable delay in breastfeeding initiation among those who delivered at a sub-district hospital, compared to a district hospital (43 vs 30 minutes respectively). This can be attributed to a range of components which influence early initiation of breastfeeding including skin-to-skin contact with the mother, privacy (or lack thereof) in the delivery room, spontaneous breathing or crying, and postnatal examination by a healthcare provider within an hour of birth.

Skin-to-skin contact with the mother reduced median initiation time by eight minutes while postnatal contact with a provider reduced it by 18.5 minutes. Surprisingly, there were no significant differences between initiation within one hour and mother’s socio-demographic circumstances.

Mr Sk Masum Billah, one of the authors of the paper adds “very few studies in the world reported direct observation based findings of early initiation of breastfeeding (within one hour of birth) among the facility deliveries. Most of the studies reported the estimate based on retrospective interviews with mothers. Our findings also break the false sense of complacency that if the childbirth happens at a facility by a trained provider, all the best/recommended practices will be ensured. In this case, we have showed (based on direct observation) that is not the reality.

This finding re-establishes the poor/substandard quality of care at health facilities, a key challenge as to why we are failing to achieve many targets. Above all, a trained provider requires almost no more than minimal logistical support to ensure timely initiation of breastfeeding among the women who had normal vaginal delivery”.

Thus, it is imperative that healthcare workers are properly trained so they can support mothers to initiate early breastfeeding (and continue exclusive breastfeeding up to six months), explaining its benefits for the baby, and assuage any concerns harboured by the mother. This is especially important in sub-district hospitals, and more efforts should be exercised to ensure that the country’s health system is equipped with professionals who are trained in all aspects pertaining to maternal and neonatal health.

WHO has prepared recommendations and guidelines on protecting, promoting and supporting breastfeeding in facilities providing maternity and newborn services, which could form the basis for adoption of these initiatives in Bangladesh’s health system. Creating a breastfeeding friendly environment in health facilities where mothers are granted some degree of privacy will also encourage them to breastfeed within the hour. 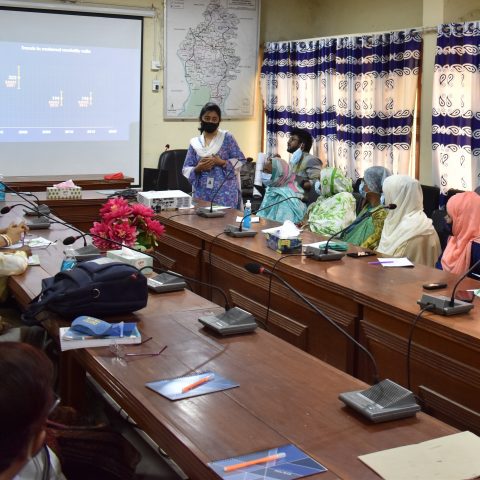